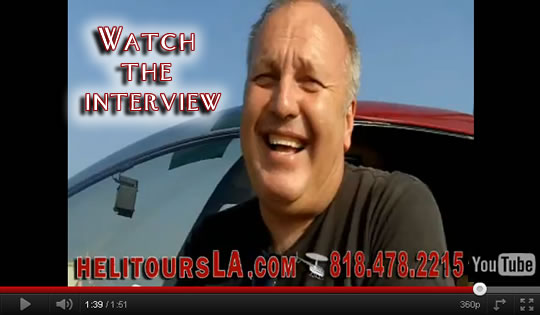 Pilot George Marciniw had dreams of flying since the age of three. The little boy that once drew pictures of helicopters while daydreaming in the classroom made his fantasy come to fruition. For him, it’s not about the money or flash that comes with this prestigious occupation but rather it’s about seeing the wide-eyed, jaw-dropping expressions of a little child or the married couple nuzzling up while celebrating an anniversary by experiencing the City of Angels from the sky.

For over 25 years, George, the founder of Helitours L. A., has been flying a multitude of missions. He has been a KNBC 4 news pilot, provided Baja 1000 race support, given flying instructions and orchestrated photography and video shoots for the entertainment industry, but giving tours in the skies over Los Angeles is still one of his favorite things to do. Whether you’re five or ninety-five years old, an aerial tour is a life changing event. The tour route takes you on a journey from downtown Los Angeles over landmarks such as the Staples Center and the Coliseum, along the California coastline and the finale is the Hollywood sign like you’ve never seen it before. There is a thirty minute tour for up to three passengers. There is also a luxury car pickup and delivery / flight package. A luxury Sedan will pick you up and drive you right on to the tarmac straight to the helicopter.

Bill and Joanne, who experienced the tour say: “Fantastic tour! We met our friends at the V.I.P. terminal at Burbank airport and felt like celebrities! George was a great tour guide! What a great evening!”